“Saw a little girl touch a big bug and shout, “I conquered my fear! YES!” and calmly walk away. I was inspired.” ― Nathan Fillion

I canned some beef stew and a few soup bases, but could never get over the fear of this pressurizing pot exploding in my kitchen. Silly, I know, but the fear stuck with me to the point that for twelve years the canner stayed packed away in its box.

Last summer I decided I wanted to can my own pinto and Great Northern beans. When I found out these had to be pressure canned, I nearly backed away from the challenge, but decided the pressure canner had been idle long enough. I couldn’t let fear rule me.  So I unboxed my pressure canner and set to work.  What I didn’t know however,  was that leaving such a pan idle for so long did have its consequences.

“To escape fear, you have to go through it, not around.” ― Richie Norton, Resumes Are Dead and What to Do About It

After preparing my first batch of beans, putting them in the jars, placing them in the canner, and closing the lid, I waited. For over an hour I watched steam escape from every place except the top little spout. How in the world was this pan supposed to pressurize, if the steam kept getting out?

Researching what the problem was, I learned the my gasket had more than likely dried out and this was making it impossible for the pan to seal. There were gaskets I could order, but what about the beans in my pan now? So, back to the Internet I went. Thankfully, there are a lot of people out there like myself that don’t have the patience to wait for parts or the desire to throw money at something when you are not entirely certain you’ve diagnosed the problem correctly. I found several people who described having a similar problem with steam escaping their pressure canner and they suggested using Vaseline to aid in the sealing process. I should have remembered this because I’d used this little trick before on hoses around the house.

I removed the gasket, rubbed it entirely with Vaseline, replaced it, and then pulled out the rubber spout on the top of the pan and greased that up too. Returning everything to the pan, sealing it again, I waited. It took some time, but as the steam increased, less and less came out the sides and eventually there was only steam coming through the spigot at the top. Success. My jars sealed and I was happy.

The only problem with my canner was the size. Most of the time, I didn’t need all the space in the 22 quart model I had. Sure it was nice to have when I was doing beans and could layer them, but if there were only a few pints that needed sealing, the time it took for this canner to pressurize was ridiculous.

That is why I bought a 12 quart model when I found it at an estate sale a few weeks ago. Of course, the only reservation I had with buying a used model was whether or not the gasket was going to be good or not. Knowing I knew how to fix it, I took a chance.

Yesterday I worked on canning green chiles that I found on the clearance rack at Meijer’s. I roasted the peppers on the grill, peeled them, seeded and cored them, packed them in 1/2 pint jars, covered them with boiling water and put them in the new canner. Thirty minutes after turning the burner on, steam was streaming through the top with only a slight leak under one of the handles. As the steam increased, the leak sealed itself and 45 minutes later I took the canner off the burner. Once the pan had depressurized I opened it and found five jars of perfectly sealed green chiles. Awesome! I can’t wait to do more. Now that I know this can be so quick and easy, I am going to add several vegetables to my Canning To Do List for the summer.

Here is what I did:

Start out by washing your green chiles and placing them on a hot grill. 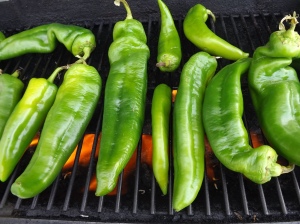 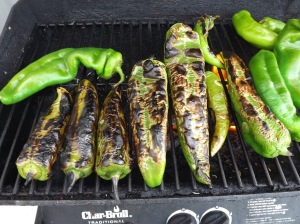 Place roasted chilies in a bowl and cover for 30 minutes. This will loosen the skins. 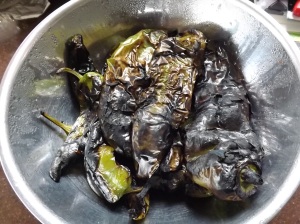 Remove the skins. Doing this under running water makes it easier. 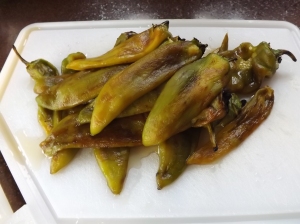 Remove the seeds and membranes. 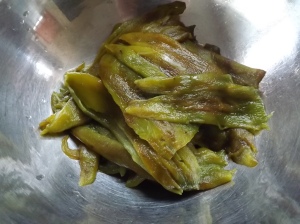 Slice or chop if desired.
Pack into hot jars, cover with boiling water, leaving a 1“ head space.
Top jars with hot lids and bands.
Place on pressure canner rack that has 2 – 3“ of water and put lid on. 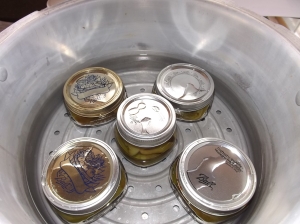 Turn burner to high and leave until steam flows through top for ten minutes.
Place weighted gauge on top.
Process for 35 minutes at 10 pounds.
Remove pan from heat.
Let cool for one hour then open pan and remove jars.
Check seals. 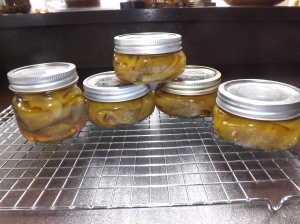 I am so happy this turned out and even more excited about all the canning I can tackle now that my fear of pressure canning is behind me. I can’t say that the thought of the pan exploding didn’t cross my mind yesterday as the steam built up and the gauge jiggled violently on top of the pan, but it didn’t explode and for this I am — Simply Grateful.