Last year I began experimenting with various citrus spreads.  For months I worked at combining flavors, sometimes using the rind, sometimes not, and learning a lot about how just the right amount of citrus can make jams and jellies really pop.

Several of the recipe that I wanted to try called for Meyer lemons.  I had no idea what these were.  I had never heard of them, let alone seen them.  From what I could gather, a Meyer lemon was supposed to be less tart, more on the sweet side.  Unfortunately, there was nothing that I could find that could be substituted here in Michigan.

Rather than not try the recipes that called for Meyer lemons, instead I decreased the amount of lemon in these recipes and substituted regular ones.  Also, I tasted the spreads often during the preparation to make sure there was enough sugar and that the spread was not turning too bitter.  Overall, I’d have to say that my marmalade and jams turned out pretty good.  Even so, learning about Meyer lemons intrigued me.

Last weekend while Hubby and I were out picking up a few things at the grocery store, I happened to walk past the produce department and on an end cap right up front they had a whole display of Meyer lemons.  I couldn’t believe it. How is it that they had them now?  Not willing to chance not being able to find them again, I picked up a couple of bags.

This morning I finally had a chance to work with these Meyer lemons and see what all the hype was about.  I slit the end off of one, cut a thin slice and popped it in my mouth.  My eyes scrunched up, the muscles in my face contracted, and I nearly choked.  This lemon was by no means sweet.  It was as tart as any lemon I’d tasted.

I wasn’t disappointed.  Maybe a bit surprised, but definitely not disappointed.  Not to be deterred, I pulled out a recipe that called for Meyer lemons and went to work.  Maybe there was something I didn’t know — maybe the lemons got sweeter as they cooked.  The recipe I chose was a Cranberry-Meyer Lemon Marmalade.  Not only would I be able to use up some of the Meyer lemons, but I’d also have a chance to use some of my stockpile of cranberries. 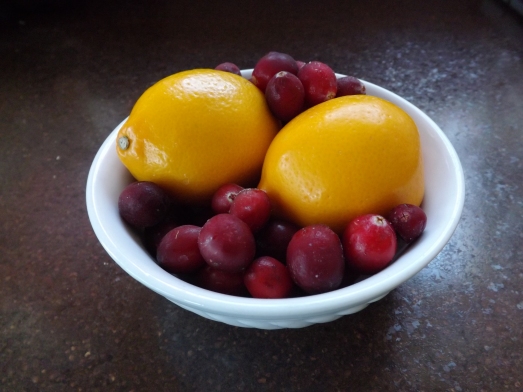 Peel lemons.  Remove the white pulp from the rind by scrapping with a pairing knife. 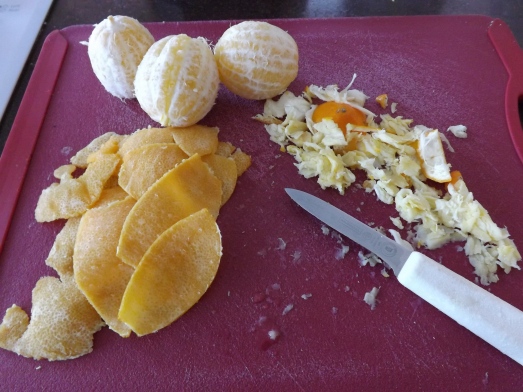 In a large pot bring the 3 Cups water with the lemon peel to boil, simmer 15 minutes.  Much of the water will cook away.  It should decrease at least by half.

Juice the lemons. I put mine in a food processor and strained the pulp through a mesh strainer.  Add strained lemon juice, cranberries, and sugar to simmering lemon rind mixture and return to boil.  Simmer 15 minutes.

Stir in Clear Jel slurry and slowly return to boil. I turned the stove down to medium for about 5 minutes and then began to increase the temperature to high.  It took about 10 minutes for the mixture to return to boil and reach the thickness I wanted.

Remove from heat and ladle into hot jars.  Process 8 oz. jars for 15 minutes in water-bath canner.

The original recipe I found online called for 7 cups of sugar and Certo pectin.  I began taste-testing the marmalade when the cranberries had popped but before adding the Clear Jel. I knew there was no way I wanted to add 7 cups of sugar to this, so I started with 3 cups and added the additional 3/4 cup before the second 15 minute simmer was done.

This marmalade is wonderful.  It has a subtle lemon flavor and the rind slivers are tender and not as bitter as regular lemons. Perhaps this is the difference everyone is talking about.  Of course this is the first time I’ve combine cranberries with lemons, so the cranberries might cut down on the bitterness of the rind as well.  Regardless, this marmalade is a keeper, and for this I am — Simply Grateful.