On the Seventh day of Christmas the countdown did begin

To say farewell to last year and see the new one in.

New Year’s Eve through the years has changed from what was once a big deal to something quiet and reflective. The transition was not an easy one to accept at first. Watching as friends and family drifted away, witnessing the kids growing up and getting closer to leaving the nest and starting their own New Year’s Eve traditions, and spending more and more New Year’s Eve countdowns without Hubby around because of the demands of work — have all taken their toll on finding a reason to “celebrate” at year’s end.

For the past couple of years New Year’s Eve has been spent with the kids, Bell, and myself all trying to stay awake until midnight, shouting ‘Happy New Year,’ and then a call from Hubby. Not very exciting, but it is quality time spent with Zeb and Grace, and that is always time well spent.

The one tradition that has not changed through the years when it comes to New Year’s Eve is the food. Whether we were having a huge crowd over or it’s just three of us, there always has to be lots of good food. Grace has told me that New Year’s Eve is one of her favorite holidays to celebrate, due largely in part to the food. Because of this, I let her help plan our menu.

This year our menu consisted of finger food: ham rolls, sushi, cheese nachos with peppers, sausages in puff pastry, cream cheese pastry, mini dark chocolate strawberry truffle cakes, and something brand new — fruit sushi. It may not seem like much, but for three of us, that’s quite a bit of food.

Everything turned out really good and after tweaking the fruit sushi recipe I found online, because I couldn’t get it to work as written, everyone agreed that fruit sushi is definitely a keeper. If you’re interested in finding out how to make it, check out my post on Simply Grateful Cooking for Dessert Sushi. 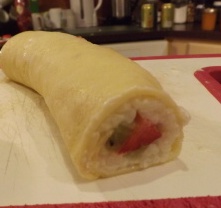 This New Year’s Eve turned out to be a nice way to send off 2015 and usher in 2016. The only thing that would have made it perfect would have been if Hubby had been able to spend it with us. I’m keeping my fingers crossed for next year, and still — Simply Grateful.

Happy New Year to you and yours! How do you spend your New Year’s Eve and has yours changed through the years too?