A few weeks ago the dill I planted for canning pickles this year began to sprout and quickly took over the pot I had given it. Last week, however, I began to notice that the pot seemed to be shrinking, or at least the thriving dill inside it.

Upon closer inspection I discovered tiny caterpillars crawling among the dill. At first I thought they were Monarch butterfly caterpillars.  We had raised Monarch’s several years ago, so I was familiar with them.  These caterpillars looked nearly identical to the Monarch’s, but seeing as these little guys were eating dill and not milkweed, I knew better.  Monarch’s only eat milkweed.

After I told Grace about them, she did a little research and informed me that what we had were swallowtail butterfly caterpillars. These caterpillars eat fennel, dill, carrot tops, and a few other greens that I have planted throughout the yard. The only place I found the caterpillars however was on the dill. 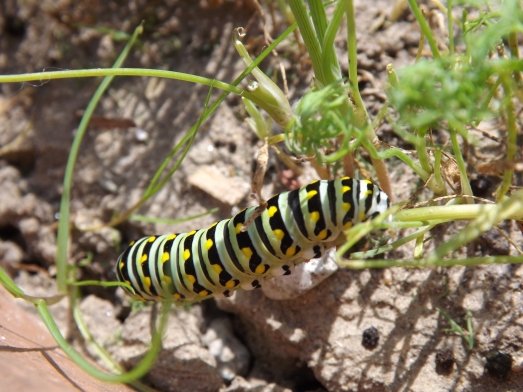 Grace, knowing that I am a sucker for all things nature, asked if she could keep the caterpillars. We read up on them and found that although these caterpillars were nearly ready to form their chrysalis’, they could stay in them for up to a year.  This would not work in our house. 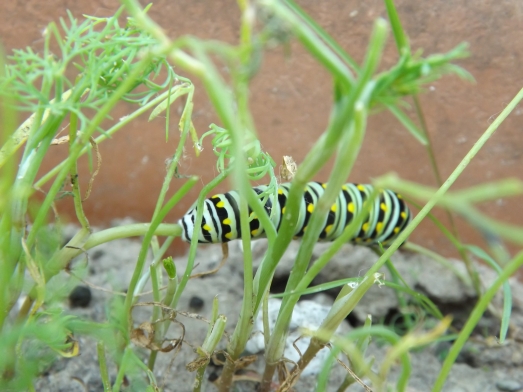 Monarch butterflies emerge from their chrysalis 10 to 14 days after they are formed. Waiting an entire year and maintaining a healthy environment for a swallowtail chrysalis was not something I believed we could do. Still, Grace pleaded for me not to remove the caterpillars from their happy temporary home in the dill. 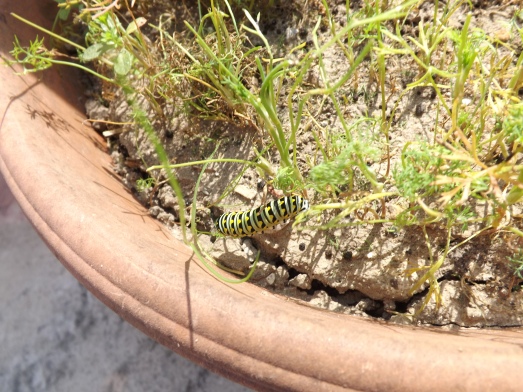 Even though leaving the caterpillars in the dill to continue eating before the long sleep in their chrysalis might mean no dill for canning this year (at least home-grown), I agreed.  What’s a little dill in the scheme of things?

Most of the dill has been eaten right to the roots. Oh well, better luck next year.

So, for the past week we have watched as the tiny caterpillars ate and grew and today I can report that all but one has moved on to find a comfortable, safe place to form its chrysalis. It is amazing how they just seem to disappear from the pot with no sign of them anywhere.

Next year I will be sure to plant at least two pots of dill and perhaps some fennel too. This way maybe I’ll have enough to feed the swallowtail caterpillars and save some dill for canning. So begins my gardening to do list for 2016!

The dill is all but eaten to the roots, but at least there is comfort in knowing we might have had a hand in a few more swallowtail butterflies gracing the world with their presence, and for this I am — Simply Grateful.

Yep, it’s finally happened!  The plum tree is in full bloom.  Not quite as many flowers this year as last, but then again we pruned much of the tree back when we picked the fruit last year.  As it is, if the weather doesn’t somehow damage the blossoms, we should have a fairly bountiful harvest. 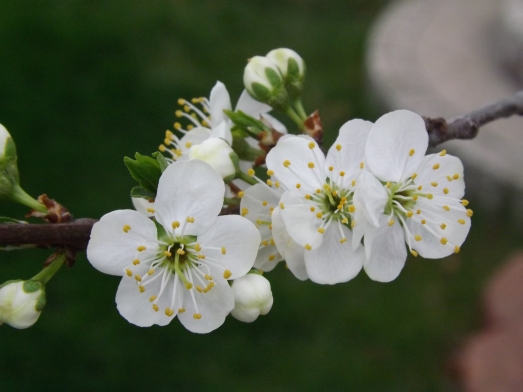 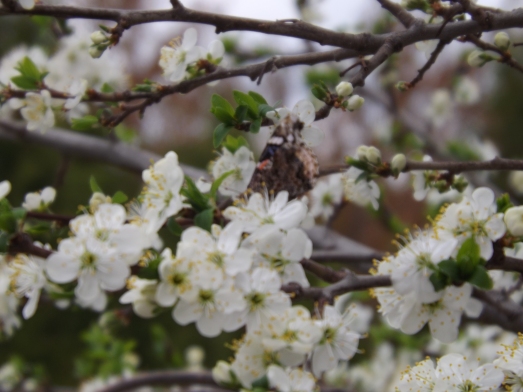 See the visitor tucked among the clusters of flowers? 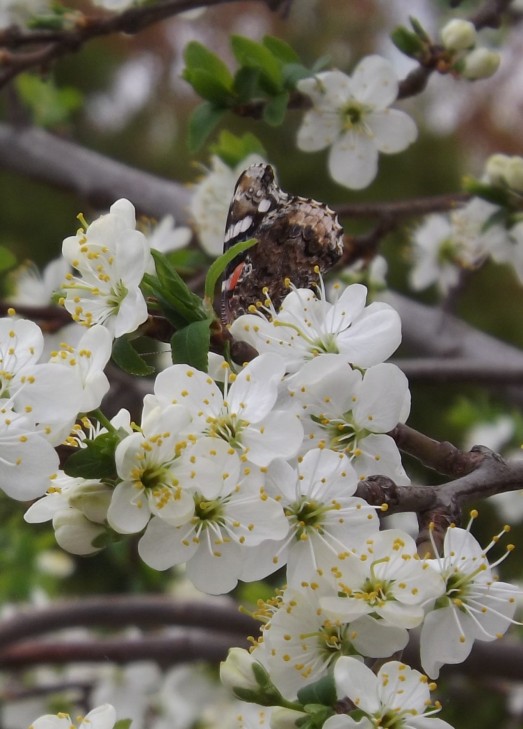 I wonder what type of butterfly this is?

The bees have busy buzzing around the blossoms nonstop for the past couple of days.  Can’t wait to see how many plums we’ll get this year.

The spring has been wonderful for fruit trees so far this spring here in Michigan.  It has been mild, just rainy enough, and a bit warmer than usual, perfect for growing fruit, and for this I am — Simply Grateful.