On the third day of Christmas, some candy I did make

And from cooking & cleaning got a break!

The third day of Christmas was spent helping Hubby out at the motel. With how many hours he is away from home, it was nice to spend an entire day with him, even if it had to spent at work. At the end of the day though, Hubby surprised me and took us out to dinner. We don’t go out to dinner very often, probably two or three times a year at most, so an evening without cooking is quite a treat.

Once we were home however, I took advantage of the time I didn’t have to spend cleaning up the kitchen from dinner and made a few candies that I’d not gotten to during the holidays. I made Old-Fashioned Butter Mints and No-Bake Peanut Butter Oatmeal Drops (both recipes can be found on Simply Grateful Housewife). The peanut butter oatmeal drops could be considered a cookie, but they are so rich and chocolatey, some might consider them a candy.

Life doesn’t always give us the time we want with those we love, so being able to spend an entire day with Hubby is very special, and for this I am — Simply Grateful.

As much as I enjoy baking and cooking, there are still some aspects after 25 years in the kitchen that still cause me to hesitate. One of these is when a recipe requires me to boil something above 200 degrees.

Boiling juice concentrates to 180 or 190 isn’t a problem, but once the temperatures go above 200, everything burns too easily.  Because of this, I tend to cheat a little by bringing whatever I am cooking to between 190-200 degrees and then transferring it to the microwave to finish up.  This has worked pretty good for me, as long as I remember to put it in a large enough bowl, as it tends to boil over very quickly.

This recipe for Chocolate Crackle Toffee has been sitting in my recipe box for a long time.  Because of the 240 degree factor in it, I kept putting it off.  Finally, today I decided to see how my little trick or finishing the boiling process in the microwave would work on toffee.

Bringing the toffee to 240 degrees in the microwave  worked perfectly.  It did boil over a bit, but had I paid attention better, that never would have happened.

I might not have confronted the real issue of tending to burn recipes that require me to bring the ingredients to a temperature above 200 degrees, but for me the solution works and that’s good enough, and for this I am — Simply Grateful.

Back when I was a young girl, every couple of years my family would head up north to a family reunion on my father’s side.  We’d spend a weekend on the farm of one of our cousins hiking, talking, playing horseshoes, riding motorcycles, picking apples, and tubing down the Ausable River.  Most of all, though, we ate.  Everyone brought food, everyone made food, and everyone ate food.  There was absolutely no chance of anyone going hungry, because there was always something cooking.  From 5 in the morning until well after midnight, everyone fought over who was going to get the kitchen next.

When my children came along, the family reunion had all but stopped.  Thankfully, one of my cousins took it upon herself to organize one last hoorah.  I took the opportunity to spend the weekend taking pictures of the old farm, hiking along the trails for one last time with my children, and gathering recipes from my cousins.

One recipe that I am thankful I got was from my cousin Linda.  She was famous for making her peanut butter fudge every time there was a family reunion.  It was popular with the kids, of course, but the adults loved it just as much. That last time we gathered at the farm, Linda taught me how to make her fudge.  I’m not sure I would have been able to make it had she just given me the recipe.  Not being familiar with making fudge, I was terribly intimidated by it. After watching her do it however, I realized that fudge wasn’t something to be afraid of.

I really should have gotten a bigger bowl to store this in. I guess we’ll just have to eat until we can fit the lid on.

Bring sugar and milk to boil over medium heat.  Heat to soft-ball stage — 235 degrees.  Linda never used a thermometer.  She used a bowl of ice water and dropped some of the sugar and milk mixture into it after it had been boiling for a while.  I use both.  I wait until it reaches 235 and then start testing for the soft-ball stage.  It isn’t an instantaneous thing that once it reaches 235 it’s done, so be sure to test.

Once the mixture reaches the soft-ball stage, add the butter and stir until melted.

Remove from heat and add creamy peanut butter.  Pour immediately into buttered or foil lined 9×9 baking pan. Refrigerate until set.  I prefer to put my fudge in a foil lined pan because it makes it much easier to remove from the pan.

Not even a year after the reunion we lost Linda very unexpectedly.  It was a terrible shock to the entire family.  After her funeral the family gathered together and reminisced.  I brought up her peanut butter fudge and everyone agreed it was the best they’d ever tasted. Many in the family commented that they wished they had learned how to make it.

I’m not sure that mine lives up to Linda’s, but it is one of my families favorites and a recipe I hope to pass down for many generations.  It has become a Christmas tradition in our family.   I am sorry Linda is no longer with us but she will forever live on in the memories and recipes she left behind, and for this I am — Simply Grateful.

I used to think that making candy was a long and involved task, but then realized that many candies are just ingredients covered in chocolate.  What could be better?  Chocolate on top of almost anything makes it better, so covering fruit, nuts and other salty snacks with chocolate makes the perfect candy.

This afternoon Zeb and I spent an hour and a half working on three different chocolate covered concoctions and now have enough candy for Grace to give as gifts to all her coworkers, to send to a friend in Florida, and to give to our neighbors.  Time well spent!

There are several ways to attain just that right blend of chocolate for covering various ingredients.  One is to buy the prepared chocolate dip in the baking section at the grocery store, another is to use a combination of milk chocolate, dark chocolate, and semi-sweet chocolate baking chips, and my favorite — buying chocolate from a candy making specialty shop.

My favorite chocolate to use when covering fruit or nuts is Nestles.  At the specialty shop in our area I buy both milk and dark chocolate and then use a combination of the two to attain a not too sweet chocolate, perfect for dipping.  Using baking chips, however, works just as well in a pinch, as does the prepared chocolate dips.  I just like having an excuse to go to the specialty chocolate shop.  There’s always so many fun things to see.

Once you have your chocolate melted, either in a double boiler or the microwave, all you need to do is add the nuts, coconut or fruit.  Today I added peanuts to make peanut clusters and coconut to make coconut clusters. 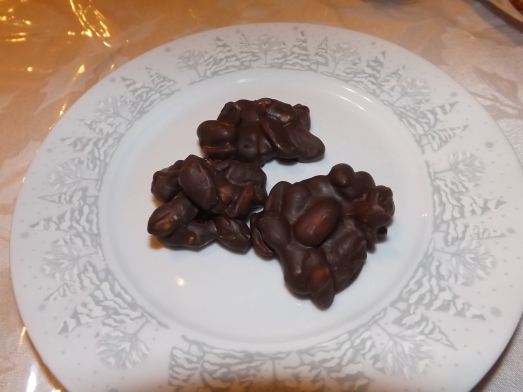 Once those two were setting in the garage (as it’s fairly cold out so I didn’t need to put them in the freezer) we set to work on melting more chocolate and dipping mini pretzels.  Then while they were still wet we sprinkled them with nonpareils.  Quite festive, don’t you think. 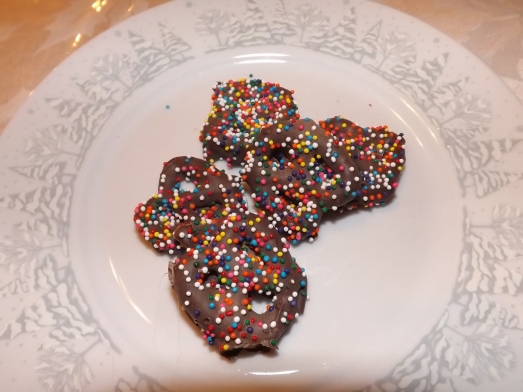 There are so many other things you can dip or cover in chocolate:  Raisins, cherries, cranberries, pineapple, almonds, and even potato chips.  Now I’ve got a list of things to work on tomorrow.  There’s no such thing as too much candy or too much chocolate, and for this I am — Simply Grateful.

This cookie is really a cheat cookie if you ask me.  It is too easy to make to be considered cooking.  To me, this tastes more like candy than a cookie, thus why it ended up being made today — the day I spent making Christmas candy.

Back about eight years ago I was working in a fruit market and took the kids with me to work every day — yes, my boss completely supported my choice to home school my children.  Anyway, the employees at the market were all very nice and truly loved my kids and chatting with them.  One morning one of the cashiers came into the office and brought the kids a big plate of these cookies.  Needless to say they were devoured before lunch.  She gave me the recipe and for years it sat in my recipe box with my continued claims of intentions to make them.  It never happened — not until today.

Why I waited so long I’ll never know, but these were so quick and easy and delicious that I can’t wait to make another batch tomorrow after I pick up some more peanut butter.

That’s it!  Quick, easy, and with ingredients I typically have in the pantry — except around Christmas when everything gets low, no matter how much planning I do.

These cookies can pass for candy in my book, or cookies in a pinch.  Today Zeb and I made these, licked the pot clean, and ate nearly half of them already, not a bad way to spend the afternoon, and for this I am — Simply Grateful.

One of my favorite candies as a child were those wonderful melt-in-your-mouth mints that I got when my parents took us out to dinner.  I can’t remember anything about the restaurants they took us to, the names or types, but I do remember that it seemed every restaurant we went to had a big bowl of these tiny mints on a podium near the entrance.  The pastel-colored mints were light and sugary, and melted in my mouth.  I could hardly wait till we left so I could take a spoonful and slip them into my pocket to enjoy all the way home.

A few months ago I was researching different candies to make this holiday season and came across several recipes for butter mints.  I just had to try them.  Zeb absolutely loves mint, it’s his favorite.  So tonight, we set to work on this simple, and quick recipe and were thrilled with the results. 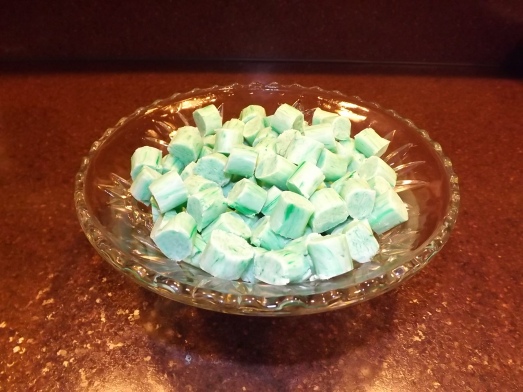 Begin adding powdered sugar, 1/2 cup at a time, beating well after each addition.  After all the sugar has been added, taste the dough. If you want more flavor, add an additional 1/4 tsp. of extract.

Divide dough into 8 to 10 balls and roll into logs.  Slice and store in air tight container in fridge.

These mints turned out perfect.  They melted in my mouth just like the ones I remember from my childhood.

Memories are great, but making these mints with Zeb and making a new memory is even better, and for this I am — Simply Grateful.