It’s been a long while! Six months and a day since my last post here at Simply Grateful Housewife and even now writing is not going to again be part of my normal routine.

So much has happened in the past 6 months, but not a day has gone by that I haven’t thought about blogging. I have piles of recipes and post ideas ready for the writing, but time just escapes me. When Hubby retired ten months ago I never dreamed that so many things that filled my days would suddenly become things of the past. It’s not that I don’t want to do them anymore, but for the moment I don’t NEED them as I used to.

Blogging used to be more of an escape for me. It filled in the long hours I spent alone — or at least without the company of my Hubby. Seeing him 16 hours a week for nearly two years and not much more than that for the twenty or so years prior to that, I was always looking for things to fill my time. Crafting, scrapbooking, writing, journaling, cooking, canning, blogging, and then gardening were just a few of the things I took up. Through the years I got burned out doing several of them, but the last batch of time-fillers I had chosen are still high on my list of things I want to do, it’s just that now isn’t their time.

Now my days are spent enjoying the company of a husband that I never truly got to know. It’s amazing how I could have been married to this person for 24 years  and am just now beginning to really know him.  Spending 24/7 with him for ten months is bound to give you a bit more insight into a person.

For better or worse! Hubby has brought this up many times and always concludes it with, “We’ve did the worse part for the past 23 years, so how about trying for the better part now!” Sounds like a plan.

We’ve taken day trips, seen parts of Michigan that we’ve never seen, done things we’ve never done, and spent days just sitting together doing absolutely nothing and yet we’re not bored. At first I thought I’d want to do all the things I thought I was missing out on. Now I’m just happy to spend a quiet morning with him sitting in front of the computer drinking coffee and me putzing around the house. Just having him home is enough to fulfill me.

This too shall pass!

I’m not going to expect this honeymoon phase to last forever and I can’t say honestly that there haven’t been days when he’s gotten on my nerves and I have to run up to the store to escape, but when I think back about all the time we lost and will never get back, I think I’ll take being with him rather than without him.

I’m always surprised to see how many visitors I receive each day on my blog and want to thank all of you for stopping by. I know as Hubby and I get more used to being together I’ll be able to return to blogging and do look forward to it. I miss the blogging but at the same time I don’t want to take time to do something so completely selfish — not now. Eventually the day will come when I’ll be able to split my time between “making up for lost time with Hubby” and doing the things that I enjoy doing by myself, but for now the only thing I want to fill my time is Hubby. That being said, who’s to say that day won’t come next week or even tomorrow?

At the moment Hubby is sitting in the office, in front of the computer, drinking coffee. I’m sitting on the couch, with Bell between my legs sleeping, and blogging. Not a bad way to spend the evening, and for this I am — Simply Grateful.

Yep, it’s true. We have a new addition to our happy home. I have been wanting this for a very long time, longer than I can remember, and finally it’s happened.

Monday morning, as I sat on the couch, avoiding opening the refrigerator and facing the 25 pounds of plums still sitting there waiting for me to do something with them, I made a decision. I was NOT going to can one more plum this year.

Nope! Not me. And if I don’t do it, no one will, so other options needed to be explored.

The only method for preserving plums that I don’t think I’d tried was to freeze them whole, or at least in half, seeing as I would definitely want them pitted first. In order to do this, there could be no more excuses, delays, putzing, or any other form of putting this off — I needed another freezer.

Financially a new one was really out of the question, so off to Craig’s List I did go. Knowing selling this to Hubby was not going to be an easy task in the first place, I decided to make sure to look at freezers within a 15 – 20 mile radius. Luck must have been on my side, because I found two that had been listed within the past three days. Crossing my fingers I shot off an email to both sellers inquiring if their freezers were still available. Within minutes I got a response from one indicating she still had it.

This freezer was only 12 miles away, upright, less than 9 years old, in great condition, clean, in the garage (Hubby would not be receptive to having to lug a freezer up basement stairs, seeing as he’d be lugging it down ours), frost-free, and she could let me take a look at it that afternoon. I called Hubby and asked if he wanted to come with me or if he just wanted me to make the corporate decision.

Now me giving Hubby the option of coming or not might seem a bit harsh, because there was no discussion as to whether or not I was going to get one, just that I was going to, but we have been at odds on this subject for far too long and I don’t ask for a whole lot. Plus, I had $100 from my birthday in June that has been burning a hole in my pocket, so if this is what I chose to spend it on, I think I should be able to.

I’ve done my homework and know how much an additional freezer will cost per year to run, measured the area out in the basement where it is going to go, and have been sending baked goods and fresh picked veggies from our garden home with Hubby’s buddy that he works out with that has a truck for months now, so I felt fairly comfortable that I had everything pretty well thought out.

Hubby chose to come with me, in fact, he was all too cooperative — it made me nervous. Still, I was too excited at the prospect of just pitting and freezing the rest of my plums that I didn’t over-think it.

At 3:15 Monday afternoon we headed out to the woman’s house and found ourselves looking at an upright freezer larger than anticipated (a good thing), newer than I thought, ice-cold inside, and in excellent condition. She was asking $125 for it and from our conversation on the phone I knew she REALLY wanted it gone, so I offered her $100. She accepted. In fact, she jumped at it.

All the way home Hubby kept talking about how nice this freezer was and what a great deal this was. The one thing he did say that stung just a bit was, “Why do I think though that you’re just going to fill this up and then want more space.”

OUCH! What could he be thinking? Hasn’t he lived with me for nearly 23 years now? Where was this accusation coming from? I was hurt — but far too excited that I was getting a new freezer to even acknowledge his comment. I just diverted him by asking him how big he thought it was. I had figured by the dimensions it was 16 cubic feet, but Hubby said it was at least 17 possibly even 19. Perfect! That’s exactly what I wanted…I mean needed.

Tuesday afternoon Hubby’s buddy picked us up and we picked up the freezer at 2:30 and unloaded it into the garage by 3:30. At 4:30 I was at Wal-Mart picking up some baskets for the shelves. By 6:00 I was home with my baskets and started cleaning the new freezer. I bleached it inside and out, although it really didn’t need much cleaning. Still, I felt better sterilizing everything and making it smell absolutely new. I plugged it in, put a cup of water in it to freeze overnight, and went to bed.

Wednesday morning I checked the freezer and the cup of water was frozen solid. Later in the afternoon Hubby and I moved the freezer into the basement, ran the extension cord, and plugged it in. It purred like a kitten. Right away I set to work at pitting my plums and placing them in the freezer on cookie sheets to freeze. By Wednesday night all the plums I wanted frozen were done.

Then today it happened. Remember Hubby’s questions/premonition about me filling the freezer… 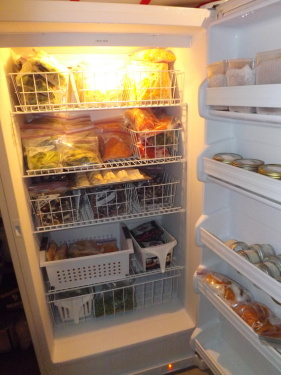 Okay so I filled it. Isn’t that what I’m supposed to do? Now I didn’t go out and buy a bunch of stuff to fill it with, I just reorganized my other three freezers and moved all the things I wanted in this new freezer in it. So although my new freezer is pretty full (I’m sure I can still get quite a bit in here), I have freed up a ton of space in my other freezers and can organize them a lot better so I can find what I’m looking for when I want and see what might have been forgotten about because it was buried at the bottom of my chest freezer or tucked away somewhere in the back of my refrigerator freezer.

I’m happy, oh so happy and Hubby is gloating because he was right, but at the same time not exactly, and for this I am — Simply Grateful.

There are some things that touch you a certain way and for some unknown reason bring happiness when you really need it.

A few days ago a very special friend brought me a new planter that she picked up for me. The moment I opened it, I knew immediately where it was going and what I wanted to plant in it. I could hardly wait to fill it with compost, buy some plants, and place it on the patio to enjoy. 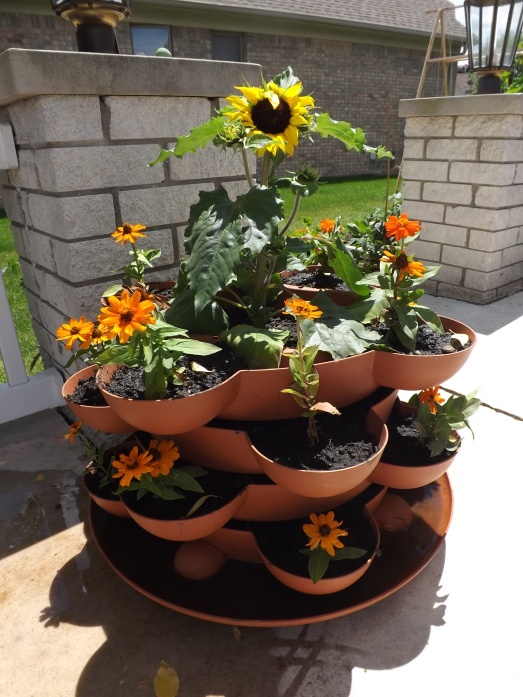 Today was the perfect day to finish this project. I needed something that would bring a ray of sunshine to my day, and for this I am — Simply Grateful.