On the eleventh day of Christmas, poppy seeds were on my mind

So a recipe for bread I had to find.

When I was 18, I moved out of the comfort of my parents home and into my first apartment. I had no roommate, no boyfriend, no one to share the bills or the chores. Every responsibility rested solely on my shoulders, including the cooking.

Growing up my mother made dinner nearly every night, but my time in the kitchen was quite limited. There were no cooking lessons from mom or afternoons spent learning the basics of cooking from either of my parents. Any cooking lessons I received came from my home economics teacher, Ms. Mazzola, when I was in seventh grade. I remember learning to make zucchini bread, blueberry muffins, and learning the basics of how to use a measuring cup, oven, and reading a recipe. Beyond that, I was self-taught.

Moving out on my own I thought I knew everything, but learned very quickly, I truly knew nothing at all. Beyond budgeting money, keeping my apartment clean, and laundry, there was also the new responsibility of being solely responsible for feeding myself. Money was tight, very tight, with more than half my yearly income going to rent, utilities, and insurance, so eating out was not an option. That first year I ate a lot of toast, eggs, and jelly sandwiches.

By my first anniversary of being on my own, I had changed jobs, increasing my salary substantially, moved into a new apartment where more utilities were included in the rent, and began teaching myself how to cook. During the first year I did learn how to cook a roast, can applesauce, and make cheesecake, but still my cooking skills were in great need of improvement. So, with a little more money to play with, I began collecting cook books.

Four years later I had more than 100 cookbooks, had learned how to cook many exotic dishes along with tons of home-style meals, and had taught myself how to can. It was an exciting and enlightening journey, one I reflect on warmly.

It’s been 28+ years since I moved out on my own and started cooking and a good portion of the cookbooks are gone (I copied the recipes I liked from most) and now I utilize the tried and true books I love and kept. I still have a soft spot for cookbooks, in fact, I think I truly like them better than researching recipes on the internet. Although there are some awesome recipes on the internet, it is terribly frustrating when I try a recipe that has obviously not been tested.  I ran into this when I first started playing around with mixes-in-jars and tried filling mason jars only to find that unless I had a jar that held 6+ cups of dry ingredients, it wasn’t going to work. News Flash! A quart jar only holds 4 cups packed dry ingredients.

There are definitely those recipe sites where all the recipes are tested, but sometimes I like to go rogue and try something that maybe can’t be find on one of those. This is when I really need to be careful and often need to rely on the experience and lessons I’ve learned throughout my years of cooking. I am certainly no expert and have had my share of failures — more than my share probably — but with failure comes a lesson and with a lesson comes knowledge and that knowledge can be far more beneficial than when everything turns out as written.

During the holidays Hubby’s mother used to make an Eastern European rolled poppy-seed bread that Hubby really enjoyed. Now that she is older and not able to really make these types of things anymore I decided to see if I could make something similar for him that he would enjoy just as much. None of my cookbooks had anything like this, so to the internet I went. I found several recipes, all basically the same and set to work. 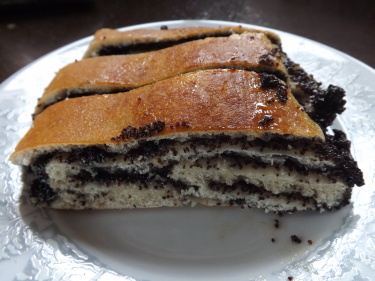 After I’d mixed the dough for the bread portion, I found I had something just slightly thicker than soup — nothing like the dough that was described. Rather than throw it out and start from scratch, I increased the amount of flour and after 3+ more cups of flour, had a dough that was ready for proofing. From that point everything went good and in the end, I had a poppy-seed bread that Hubby said was perfect. If you’d like the recipe, check it out on Simply Grateful Cooking, Poppy Seed Bread.

Honestly, having the recipe not work out worked out for the best in the end. Seeing as I had a ton of dough to work with, I decided to try making some fruit, cinnamon, and poppy-seed sticky buns with it. These were even better than the bread and something I could call my own. At first I thought I would cut the recipe in half so I wouldn’t end up with so much dough, but now that I have more than one thing I can use this dough for, I think I’ll keep it as is.

Whether it’s preparer error or creator error, some recipes are just not going to turn out no matter what you do. Being able to salvage a recipe and even expand on it is one of my favorite aspects of cooking, and for this I am — Simply Grateful.