My body feels like it’s been run over by a truck. Okay, so I don’t actually know what it feels like to be run over by a truck, but I imagine it’s got to hurt — an awful lot, and my body right now, hurts, a lot. Lifting my arms to put on a shirt took more effort than I’d like to admit and bending over to pet Bell made me howl.

Why? Well, I guess the gardening, sod removal, weeding, planting, and bush removing that I’ve done the past three days, finally caught up with me. I’m just not that young anymore and am aging faster than I can keep up with. At the rate I’m going, by weeks end I’ll be older than I was just a few days ago, which goes without saying.

In order to recoup, revitalize, and renew my perspective, today was a day to ground myself and the best way I know how to do this is to hang laundry on the clothesline, fill a vase with the last of the lilacs from the bushes on the side of the house, throw a pot of soup on the stove, and can something. Nothing helps me “reset” after a busy couple of days than getting back to basics.

Laundry is never a problem around here, there’s always something to wash. Clipping the lilacs only took a minute or two, and filled the house with their sweet smell one last time until next year. The soup? Well, while most people were probably grilling on Memorial Day, I went against the grain and made roast turkey.

Yep! Thanksgiving in May with all the fixings. Turkey, homemade stuffing, mashed potatoes and gravy, homemade cranberry-plum sauce, pickled beets, and sweet potatoes. No pumpkin pie this time, but we did have fresh fruit for dessert.

The best part of making turkey any day of the year is what type of “Leftover Makeover” can be done with the turkey — Turkey Carcass Soup. Had it not been 85° on Memorial Day and the kitchen not been 95° because the oven had been going for five hours along with all four burners on the stove, I would have done exactly what I do Thanksgiving night, thrown the turkey carcass in the pot right after dinner. Not being thrilled with the prospect of sweltering in the heat the rest of the night, I chose to refrigerate the carcass until the weather broke a bit.

This morning, the weather was perfect for putting a large stock pot on the stove and allowing it to simmer all day on low, filling the house with the mouth-watering smell of roasted turkey and herb stuffing all over again.

Growing up, my mother never made Turkey Soup. I’m not sure why, she just never did. She was a good cook, albeit her comfort zone never wavered beyond meatloaf, roasts, and spaghetti. Although certainly not a gourmet meal, turkey soup was just not on her menu repertoire.

After many years of enjoying homemade chicken soup, one Thanksgiving night, as I was striping the turkey carcass of it’s meat for storage, preparing the bones for the trash, it hit me — Why not throw the carcass, scraps, fat, bones, and skin in a pot of water and see what happens? The results were better than I imagined. Unlike chicken soup, which I make with chicken thighs with the skin bought specifically for making soup, the turkey carcass had remnants of stuffing and roasted skin which gave the soup a rich, deep flavor. The broth was so good, I decided it would be a shame to muddy it with anything more than some fresh, needle-thin egg noodles, so I strained everything else out. Although not substantial enough for a meal, especially without any vegetables or meat, the flavors of the roasted turkey, herb stuffing, and vegetables added to the broth made for an amazing first course to any dinner or a great accompaniment for cold or hot turkey sandwiches for lunch.

Today’s “Leftover Makeover” is Turkey Carcass Soup — I know the name is a bit risky, but I bet it’s one you’ll remember. 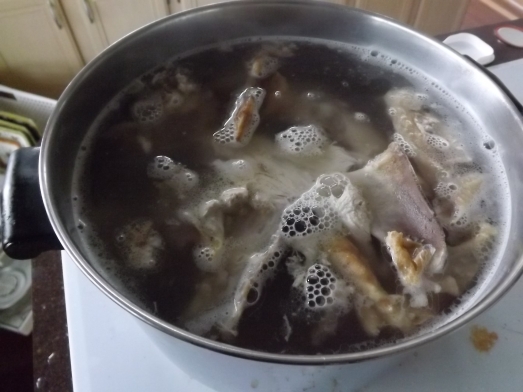 Bring soup to boil over high heat. Reduce heat to medium and simmer for 3-4 hours or until all meat falls from bones and carcass falls apart.

After only an hour the broth is already getting murky from the fat.

Remove from heat and strain vegetables, bones, and meat from broth.
Return broth to pot and bring to boil.
Add thin egg noodles and return to boil. Noodles should cook within 2 – 3 minutes. 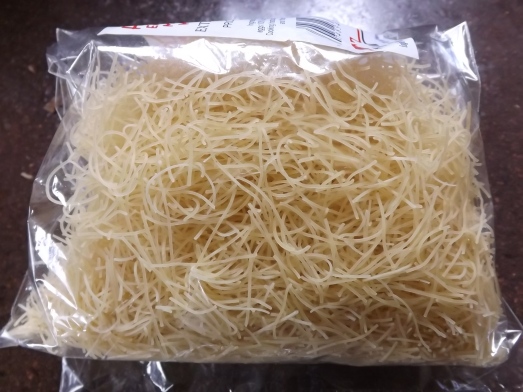 If you want vegetables and/or meat in your soup, once the soup has been strained, you can add diced turkey and vegetables to the broth, cook an additional hour or more depending on how thick vegetables are cut, then serve.

Taking a break from the seasonal demands of summer might not have been on my to do list but sometimes the body knows what the head won’t admit. Today my body told me it needed a day that didn’t include hauling dirt, digging holes, pulling weeds, trimming grass, pruning plants, or planning my next big garden project. This gave me the time needed to ground myself and get back to basics, and for this I am — Simply Grateful.

“The only real stumbling block is fear of failure.  In cooking you’ve got to have a what-the-hell attitude.” ~ Julia Child

Once I’d decided that Mexican was the choice for yesterdays menu, I went in the basement and pulled all the home-canned supplies from the shelves. The most exciting part of making the meal was being able to use the jalapeno peppers I’d just canned a few weeks ago. I’m not sure why I never thought to can them myself years ago, but when you start thinking one way…it’s almost impossible to change.

With the supplies at the ready, I opened first the tomatoes I’d canned last summer. Surprisingly these were my last two quarts. Good thing tomatoes are a constant during the summer. Having to wait until late August would be far too long a wait.

Once the tomatoes were pureed, I opened the peppers. Wow! My mouth began to water immediately. They smelled hot but I couldn’t control myself — I emptied the whole pint into the food processor and added the pureed paste to the tomatoes.

Here are a few pictures of the process: 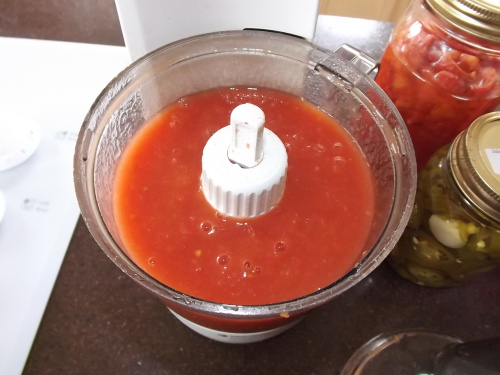 My salsa isn’t very unique. My family does not like it chunky, so most everything in it is pureed so that the chunks are  small. I, myself do not like tomatoes. I eat them as a sauce mostly, but have never liked them raw. I think I have an alergy to them as well. Whenever I am in the garden trimming the plants or harvesting tomatoes, I end up with a rash all over me. Last year my daughter finally forbid me from going in the tomato garden. She took over so I wouldn’t spend the next day scratching and puffy.

I have added fresh onion and green or red bell pepper to the recipe on occasion, but for the most part, this is how we enjoy it. Here is the recipe if you’re interested.

This is really just a starter salsa recipe. There are so many more options with this base. You can add in freshly diced onion, peppers, tomatoes or our favorite — cilantro. You can make this your own with whatever your preferences are.

I have to admit that the full pint of peppers made the salsa very hot. I will be adding more puree to calm it down once we’ve eaten more of it. I’d add more tomatoes, but that shelf is bare.

As luck would have it, yesterday I happened upon two bags of green chilies on the discount rack at Meijer’s. I had put canning these on my Canning To Do List for the summer. Of course, who can wait until summer when there are two bags for less than $2.00 staring you right in the face. I picked them up and plan on roasting them today and giving canning them a shot. They have to be pressure canned. I’m not as comfortable doing this, but I did just pick up a new 12 quart pressure canner at an estate sale, so no better time to try it out.

After the salsa was done, I worked on the Mexican Tortilla Soup. Not sure where this recipe came from, but I have changed it so many times over the years, I’ll call it my own. Here is that recipe, very easy and quite hearty (so hearty in fact that the family asked me not to make the tacos with it last night — they figured they be too full from the soup to enjoy them). 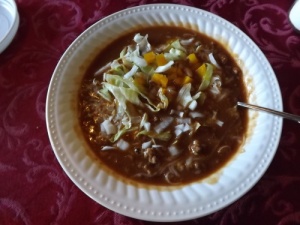 This soup is really more like a chili. Definitely substantial enough for a meal, but if you limit everyone to just one bowl (good luck with that) you could serve a main course as well.

So, yesterday’s dinner is under my belt and seeing as I didn’t make the tacos last night, dinner is planned for today, and for this I am — Simply Grateful.