Grace was getting over food poisoning this past weekend, so Father’s Day was postponed. We won’t get together with my father until this coming weekend, but I was able to make a special dinner for hubby today reminding him how special he is to all of us.

Steaks on the grill are a no-brainer, but the rest of the dinner took a bit of time and planning in order to get everything on the table at the same time, hot and savory. The first thing I had to do was bake the potatoes. Not wanting to waste the opportunity of running the oven, especially on such a hot Michigan day, I decided to bake as many potatoes as would fit in the oven. This way I could freeze some twice baked potatoes for other days as well as the extra potato shells for deep-fried potato skins.

Bake potatoes at 450° for 45 – 50 minutes depending on size of potatoes. Remove from oven and cool slightly. 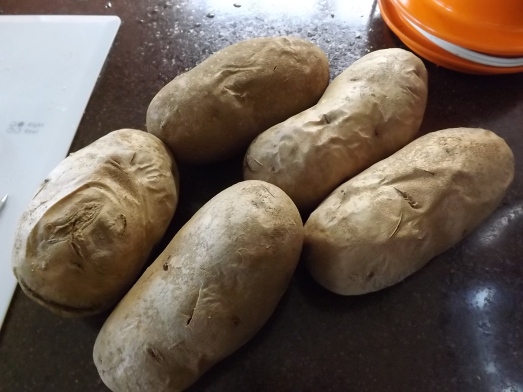 The warmer the potato, the easier it is to scrape out the stuffing. Slice the potatoes in half.

Using a teaspoon, remove as much of the potato as possible without damaging the skin. Place potato pulp in bowl and set shell aside. 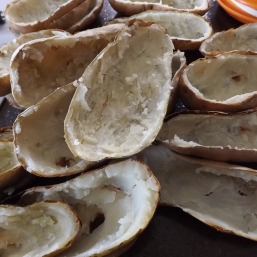 Once all the potatoes are hollowed out, mash the potato. Add salt, butter and milk until the potato is the desired consistency.

I found that I don’t like to mash the potato to the same consistency as traditional mashed potatoes. These are “baked” potatoes after all, so I leave some lumps in the potato filling.

After the potato is mashed, begin refilling the hollowed out potato shells. There will not be enough potato to refill all the shells, especially if you heap the potato in the shells as I do.

Place the filled potatoes in a Corning Ware dish, top with a slab of butter and cheese, and return to oven at 350° for 20 to 25 minutes.

With any extra filled potatoes, place on a cookie sheet and freeze until firm, wrap in plastic wrap then foil, and return to freezer. Do the same with any extra potato shells. These can be used for either deep-fried potato skins or can be filled with any leftover mashed potatoes in the future.
After the potatoes were done, I turned my attention to the stuffed mushrooms. These have become a family favorite and one that makes mushrooms a standard on my weekly shopping list.

Cook bacon till crisp. Cool and then crumble. Place in small bowl. 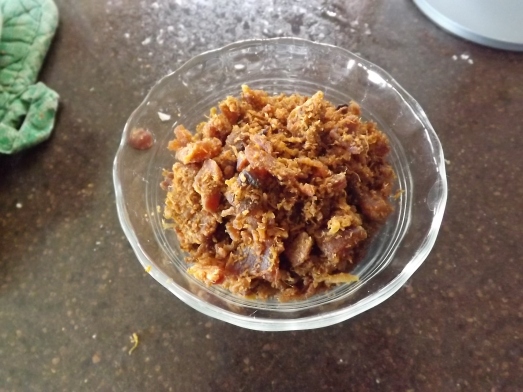 Clean mushrooms and stem. Make sure that the caps are hollowed out. Place in baking dish.

Fill each mushroom with cream cheese, heaping the cheese on top.

Dip each mushroom in crumbled bacon, pressing down so bacon covers cream cheese. 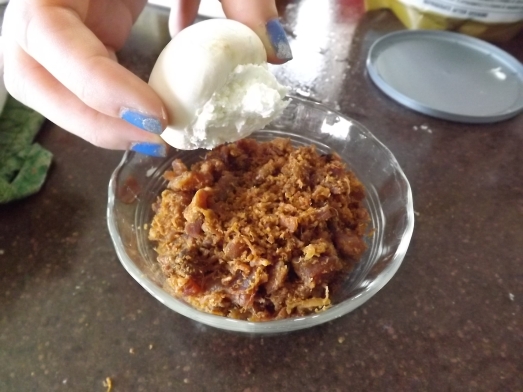 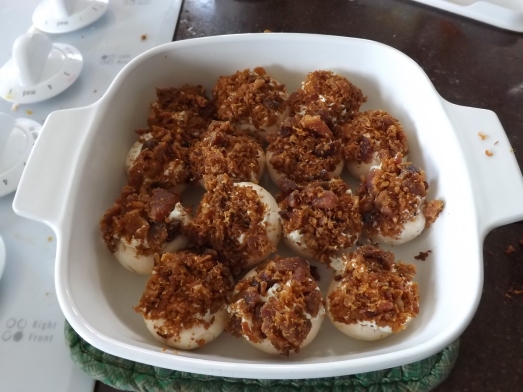 Sprinkle with parmesan cheese. Bake at 350° for 20 minutes. 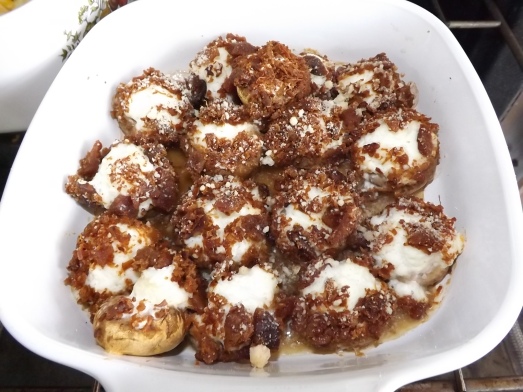 With the potatoes and mushrooms in the oven, and the steaks started on the grill, I worked on the final part of dinner — shrimp scampi. 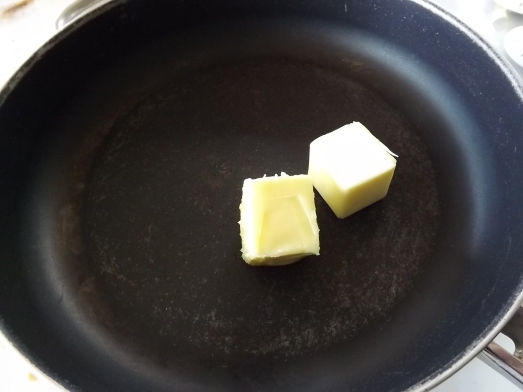 Add shrimp to butter and cook for 1 minute.

Turn shrimp and add the garlic. Cook for 2 minutes more. Flip one more time, mixing the garlic and the shrimp thoroughly.

Remove from heat and cover until ready to serve.

Hubby loved his Father’s Day dinner, even if it was a few days late. Enjoying this meal of some of his favorite foods with the kids, when everyone was feeling good, was wonderful. I’ve always believed that holidays should not be the only days to do something special for someone. If you aren’t going to treat every day like Father’s Day or any other “holiday” for that matter, doing it on that one day is not going to make up for the rest of the year. Of course, this doesn’t mean that I don’t love a good excuse to go overboard every once in a while. Today was special because we “celebrated Father’s Day,” but actually we celebrate being a family everyday and for this I am — Simply Grateful.